It's now all the exciting things start to happen 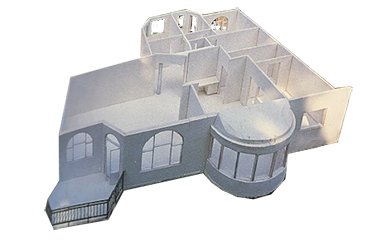 It's now all that exciting things begin. The year was 1987, a thousand people from the municipal housing queue receive an offer and a question: Do you want to be part of a unique housing project that gives you the opportunity to shaping your dream home?

For two hundred people, it was an offer they could not resist. Sixty of them came to an introductory meeting where it became clear that money was not required but a lot of commitment and willingness to participate in a planning process that will take a lot of time.

When the first conversations with architects was ompleted, just over thirty are left and ready to invest time and love in their future housing.

The job of the various working groups that are now being formed is to put together wishes and ideas from the ultimately 39 people with different dreams and thoughts about how they want to live, and this within a framework of how much everyone is willing to pay in rent for this accommodation, and what standard and area they want.

It will be a lot of work for the architects to reconcile this, but model building makes it less complicated.

Participants got to learn about house building and living in the so-called Boskolan, “School for a good living” where kitchen experts and bathroom experts talk about their respective area. The architects had to tell everybody that they should relate to a future neighbor who wants to live on the other side of your maybe round wall.

The models were helpful both to see their own thoughts about the dream apartment but also its connection with everyone else's dreams.

For example, everyone wanted to live on top of the house.

Suddenly it became clear that the areas were not enough, so in the middle of the planning process, an application was submitted to the municipality for an extension of the building permit, the house needed to be higher and the areas larger.

Every now and then there were dropouts, and new wannabees came in.

In September 1988, everyone was offered a ride in a construction lift to see approximately where their apartment would end up. Then it also became easier to understand that there were other positions that could fit than high up.

When 1989 begins, everyone is placed in the house, all external and internal frames for the apartments were established. “Boskolan” focuses more on planning the individual apartments – kitchen, bathroom, windows, doors and room distribution.

Then a building permit can be applied for and the shovel put into the ground on October 5. The shovel had five shafts – representatives of the tenants, MKB, the building company HNB, the City of Malmö and the architects involved, each held their own part of the multishafted shovel when starting to dig in the construction area.

Discussions about the rent linked to the living area and standard then take off. Maybe the creative process is stopped here for a while. For example, it becomes too expensive with as many different window types as desired, in the end they are cut down to 40 different window shapes, distributed over the house's total 323 windows.

One or two of the prospective tenants thought that the promises of total freedom to plan as they wished did not fit in any longer. But on the other hand, someone should pay the rent.

With details of this type investigated, construction began in December 1989. Many tenants follow the construction with excitement, both the whole and their own apartment. Legal and occasional "Illegal" workplace visits and unofficial photo sessions documented the construction step by step.

The exterior of the house, the shape and color of the façade, the entrances, the window colors where the tenants have only been advisory to the chief architect Iwo Waldhör, are firstly revealed when the tarpaulins are removed the days before the inauguration on May 16. The "revelation" is attracting attention throughout the country. The different and colorful façade with three shades of red-gray plaster and window frames in many colors transforms the rather hidden "process" into one of Swedens most famous and rewritten residential buildings.

At the end of May and the beginning of June 1991, the tenants move in, some of them almost on the day four years after they were selected to participate in the Bo100 project.

The administration, ie care and administration of the house, cleaning, repairs and everything that belongs there is a different story. The forms for this had been discussed for a long time, but at the time of the move, everyone agreed to try to manage the house themselves, as a housing association